This is a State Government project and the site project management is being undertaken by the Department of Planning, Transport and Infrastructure. Information on this page has been provided by DPTI.  Further information is available via the DPTI website:

The Department of Planning, Transport and Infrastructure advises that works to install the final asphalt layer on the four interchange ramps at the Bald Hills Interchange are scheduled to commence, weather permitting between Wednesday 16 November and Monday 21 November 2016 at the following times:

Advance notice signage will be in place to advise motorists of the changed traffic conditions, and road users are requested to take extra care when workers are in the area and observe traffic signage and speed restrictions.

For safety reasons and to ensure the integrity of the surface the posted speed limit is expected to be reinstated to 110km/hr in December 2016, weather permitting.

Motorists are encouraged to find alternate routes and avoid the area if possible.

For real time roadwork information download the AddInsight app at www.addinsight.com.au/app or visit the Traffic SA website at www.traffic.sa.gov.au.

Some asphalt repair works on the South Eastern Freeway opposite two of the new ramps will be undertaken from 10 to 14 October as night works.  The Variable Message Boards will detail which ramps are accessible each night.

The interchange is under the care and responsibility of the Department of Planning, Transport and Infrastructure.

DPTI have advised Council that the final wearing course of asphalt for the ramps is to be applied in November/December as soon as suitable weather conditions are forecast.

The ramps are currently under speed reduction to 80km/h.  Once the asphalt has been laid, the ramps will be much smoother and the normal freeway speed limit will be applied.

A new traffic interchange is now officially open on the South Eastern Freeway – improving access, safety, and travel times for tens of thousands of people.

The interchange provides more efficient access on and off the freeway via Bald Hills Road reducing traffic congestion through Littlehampton and Mount Barker and will improve travel times and road safety for commuters travelling to the east side of Mount Barker and reduce congestion in Mount Barker.

As well as giving commuters a better run to their destinations, the new interchange will also enable tourists to move around the Adelaide Hills easier, and improving freight transport.

The project also included construction of a new roundabout at the intersection of the Old Princes Highway and Bald Hills Road to cater for the increased traffic expected from the new intersection.

The State Government's contractor Bardavcol have advised it will be necessary to close the Little Dublin Road West entrance to traffic for a period of approximately 2 weeks commencing 6 July 2016.

To facilitate the sealing of Bald Hills Road south of the South Eastern Freeway, the contractor intends to place asphalt past the Yaktanga Way/Bald Hills Road intersection on Friday 20 May 2016 between the hours of 7.00am to 3:00pm.

A detour to direct all Yaktanga Way traffic via Burnbank Way to Bald Hills Road will be sign posted.

The contractor will undertake a letterbox drop to local residents with the message being reiterated using variable message boards.

All Ramps to be open by September 2016

The New Freeway Interchange construction is progressing well. The State Government has advised that it expects all ramps to be open by September 2016 under a speed restriction with completion of all work by the end of 2016.

Road works are progressing well along Bald Hills Road. Bardavcol anticipates the majority of the work will be completed by Mid 2016. However, to ensure Bardavcol meets this date and to minimise the overall period of disruption, it will be necessary to close the Bald Hills Road Underpass.

This work will take place on Sunday 17 April 2016 between the hours of 6:00am and 6:00pm. During this time, Bald Hills Road will be closed between Springs Road and Old Princes Highway with the exception of local traffic only. Please note that Bald Hills Road will be completely closed at the Bald Hills Road Underpass. Local traffic needing access north of the South Eastern Freeway, will need to be from Old Princes Highway and local traffic needing access to the South of the South Eastern Freeway, must be from Springs Road. Traffic management and signage will be in place to advise of the detour and to assist traffic.

The road will be reopened as per current conditions at the end of this shift. Regular daytime construction works will continue as normal on Monday 18 April.

We apologise for any inconvenience caused during this work but assure you every effort will be made to minimise impact during this period.

If you have any queries related to this work please call Project Manager – Daniel Kranixfeld on 0419 851 965.

DPTI's contractor, Bardavcol, will be undertaking night works at the junction of Old Princes Hwy and Bald Hills Rd.

Due to the recent wet weather time frames have been affected but still targeting Early 2016 for the opening of the OPHwy roundabout and the Adelaide On ramp.

The Bald Hills Road Underpass will be down to one lane for at least the next two months starting Tuesday 1 September 2015.

Traffic Controllers will be on site to assist emergency services if and when necessary.

Section 23 has now been approved by the Minister.  The contractor will be starting works onsite without restrictions from 1 June 2015.

Early works will begin on Monday 1 June, 2015.  These works will include preparation for the construction of the Site Compound and Service Relocations.  Major earthworks for the ramp to Adelaide are expected to begin towards the end of June.

Using Council’s concepts for the interchange, the Department of Planning, Transport and Infrastructure has developed a plan for the new interchange and has invited property owners adjacent to the new freeway interchange to attend a meeting at the Mount Barker Golf Club on Wednesday 8 April at 6pm to discuss the plan.  Adjacent residents are encouraged to attend. 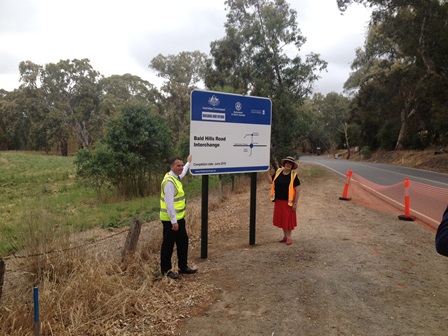 DPTI is commencing tree removal to allow construction of the New Interchange on 8 December 2014. Tree removal is limited to the Sate Government owned Freeway Reserve (see Plan). Council is still in discussion with DPTI about trees along Bald Hills Road to determine where high values native trees can be retained through design adjustments.